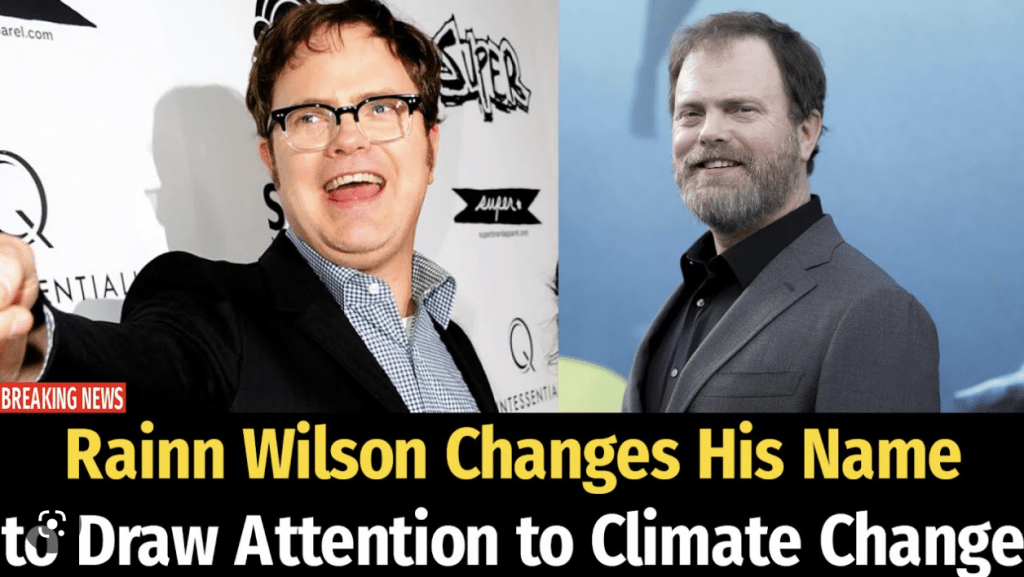 Known for his role as Dwight Shrute in the hit show The Office, Rainn Wilson has announced that he is changing his name to “Rainfall Heat Wave Extreme Winter Wilson.” The name change announcement comes via Wilson’s recent Twitter post. In the tweet, Wilson said that the new name was timed in accordance with the United Nations climate change conference which was set to take place the same week.

What does Winter Wilson stand for?

Wilson said the name represents the concerns he has regarding climate change. He posted a video in his tweet in support of the environmental advocacy group Arctic Basecamp to bring attention to climate change issues. “The Artic is melting at millions of liters per second, yet this problem can’t seem to make a name for itself, so we’ll make a name for it,” Wilson said.

Wilson has not yet confirmed he legally changed his name and, as of November 17, his Twitter account remains RainnWilson. However, he told his followers that did announce that he had attempted to change his account name but was unable to do so because of current Twitter restrictions regarding verified accounts. Even though Wilson was unable to change his Twitter name, he followed up with a tweet saying that he is serious about taking such action.

“This is not a joke, I’m as serious as the melting Arctic, which amplifies global risks including extreme weather events around the globe,” Wilson said. “I’m hoping this name change brings attention to this growing…er, melting issue. We need world leaders at COP27 to take notice and take action.”

Wilson refers to the United Nations Climate Change Conference, which is annual. The aim of the two-week conference is to discuss actions that can be taken on climate change. This year, the conference is set to be hosted by Egypt from Nov. 6-18. According to United Nations’ News, last year’s COP26 conference was the five-year mark since the Paris Agreement was signed, disregarding one year due to the COVID-19 pandemic. At the conference, more advancements were made in the agreement and countries were expected to follow-up with more detailed explanations about implementing national plans focused on climate change.

Despite the commitment agreed to at last year’s conference, United Nations’ News reported that as of late October, only 24 of the 193 countries at the conference have submitted these detailed plans to the United Nations. This year’s conference is focusing on mitigation and eliminating emissions, adaptation to the climate crisis, and climate finance.

What is Wilson’s primary concern?

Wilson’s primary concern is the cooling temperature in the Arctic. According to NASA, the polar ice caps melt at a 9% rate per decade. Due to this decrease, the overall thickness of the Arctic’s ice has decreased by 40% since the 1960s. If this rate of melting continues in the Arctic, the U.S. Center for Atmospheric Research projects that the Arctic will be completely melted by 2040. Wilson’s reported name change is designed to ultimately persuade world leaders attending the conference to reshape the narrative and design mutually acceptable solutions to the climate crisis.

“As a cheap little stunt to help save planet Earth, I’ve changed my name on Twitter, Instagram, and even on my fancy writing paper,” Wilson said according to CBS News. “I’m an Arctic risk name changer which is going to be a game changer.” The actor said that if other celebrities decide to join him in changing their names to reflect the climate change struggles, then they will be able to gain the attention of different leaders at the COP27. In addition to his own name change, Wilson suggested that other celebrities change their name. And he name-dropped some doozies: “Cardi The Article B Melting,” “Amy Poehler Bears Are Endangered,” “Samuel Earth Is Getting Hot As L. Jackson,” and “Harrison Why Not Drive and Electric? Ford.”

How does this publicity stunt impact Wilson’s personal brand?

Wilson’s unusual tactic to draw attention in the name of climate change has generated a flurry of comments on traditional and social media platforms. Whether or not this stunt impacts his personal brand, Wilson raked the leaves and has people talking. He has brilliantly leveraged his global brand platform to save the planet – one Rainfall-Heat-Wave-Extreme-Winter-Wilson name at a time.

Denise Kaigler is the founder and principal of MDK Brand Management, a firm specializing in brand strategy, business consultancy and career coaching. Prior to launching her business in 2015, Denise held senior, executive, and C-suite roles at several global brands. Denise is the author of Forty Dollars and a Brand: How to Overcome Challenges, Defy the Odds and Live Your Awesomeness, available online at Amazon and Barnes & Noble. She is also the creator and executive producer of Brand Rewind ™, a multi-media experience that explores the actions and behaviors of personal and business brands and empowers others to learn from them. Sign up for the Brand Rewind ™ newsletter and subscribe to the Brand Rewind LIVE YouTube channel by clicking here.